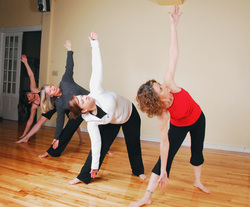 What many people do not know is that much of the yoga we practice in the West today has its origins in men's gymnastics, wrestling, body-building and martial arts.  In its earliest years, the practice of yoga was limited to a few seated poses to prepare the practitioner for extended periods of meditation.  The more vigorous poses and all of the standing poses were born out of male-centered exercise regimens in the late 19th, early 20th centuries.

So, what does this mean?  Well, since the lion's share of people practicing yoga in the West is still women (although the participation of men is visibly on the rise), it puts to question whether the practice that has emerged into the 21st century truly benefits the female body or not.  As is often the case, the answer is both 'yes' and 'no'.

In "Yoga for Women" you will learn about body mechanics, in general, and the unique nature of the female body specifically so that you can choose postures/asanas that will support your body, rather than potentially harm it.

Many yoga practitioners heavily focus on flexibility, perhaps because we are a nation of tense beings.  However, the female body is, by nature, more flexible, especially in the area of the pelvis.  This doesn't mean we don't experience tense muscles; however, with the repeated focus on 'opening the hips', rather than strengthening the pelvis, we could be doing ourselves more harm than good.  "Yoga for Women" will guide you through practices that bring a much needed balance between 'strength' and 'length' and help you to cultivate physical awareness and loving self-care.

When we embrace these 'complementary opposites' we give ourselves the experience of becoming a fully-integrated human.  We do this by creating body awareness, developing emotional tolerance and training the mind...all through the physical practice of the poses (asanas), breathing exercises (pranayama) and meditation (pratyahara).  Another key method to developing an authentic self is to engage in the practice at a depth that is appropriate for your physical, emotional and mental body.

Come join me in the playful and self-loving practice of yoga and allow the totality of who you are to "be"!